Setting Up Axios Interceptors For HTTP Calls With Refresh Token

A modern & popular promise-based HTTP client which we use to perform HTTP requests is Axios. It supports all modern browsers, including the old ones also. It allows users to make XMLHttpRequests interact with servers. Also allows request and response interception, allows users to set response timeout, Offers protection against XSRF at the client-side, Supports the Promise API, Allows request cancellation, Allows request and response data transformation, and Offers automatic transformation for JSON data.

Axios have many other features, including configuration defaults, error handling, canceling of requests, serializing JavaScript objects to JSON automatically, and many more. In this article, we will learn to set up axios interceptor for HTTP calls with the refresh token.

What Is An Interceptor?

Generally, an interceptor is a function called for every HTTP request, and the application receives the response. In another word, the Axios interceptor is a function called by Axios to update/transform each request before forwarding it & check/filter the response before returning it. In short, you can intercept the requests or responses before they are handled by then or caught.

Before being handled by the .then() or the .catch(), interceptors have a feature that allows an application to intercept requests or responses.
To access data, every HTTP request needs a header property to verify the application requesting data is allowed.

Sometimes the returned HTTP response is a 400 or 500 Bad Response Code status. At those times, you might want to automatically retry the request or verify that the rejected authorization is still valid.

Mainly use of this particular interceptor is whenever the application makes an HTTP request to one of the supporting service’s URLs. Axios robotically attaches a header to the request with the username kept within the state. If the HTTP request isn’t always approximately going to one of the services, the interceptor does not do anything to alter the request and lets it cross on its way unaltered.

In some cases, if the request is malformed, the second error() function will start in and throw an error rejecting the request, which gives why it happens.

Axios is importing at the top of the file with ES6 import syntax, and it’s ready to be used. Here we are using ES6 arrow functions in this example.

An HTTP response comes returned from a service with a 401 unauthorized error; therefore, the motive is that the primary argument handed interior to the response interceptor is undefined. If the response is some 200 responses, the Axios interceptor doesn’t care.

If the HTTP response is 401, the secondary function (originalRequestRetry() function) is triggered and checks if the logged-in user’s credentials are still valid since a 401 indicates the user’s authorization token, cookie, or session user has expired. Suppose the user’s session has indeed expired.

In that case, the session will be terminated by the application logging the user out and prompting them to log in again if that is not the reason for the 401, and the user will be able to continue their session. 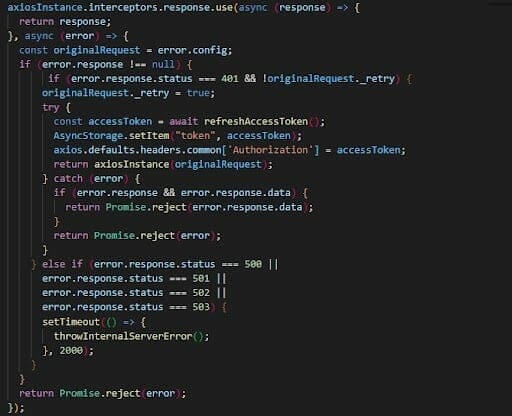 If the request fails again and the server continues to come back with the 401 status code, it will head to the Infinite loop. For handling this, we tend to use a flag decision _retry on the initial Request (config). _retry is about to true right the first time we meet 401 status.

Refresh token means when our request failed with status code 401 at this time, applications show an error and do not run at that time due to Session Timeout.

For that issue, we have issued refresh_Token by calling our reAuth API and got our new access_token by giving the device_token to the API.

Full Example For Getting Refresh token

On there, we are already given our header in the interceptor, so we don’t need all of these. We have only to pass our parameters to get our responses.

Full Example Of An HTTPService 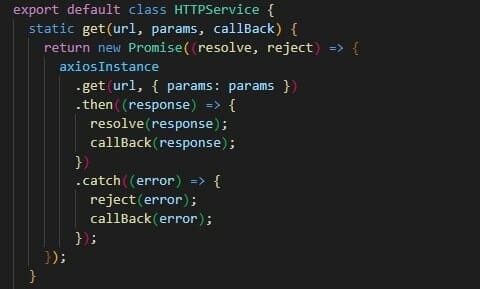 In this below function, we are passing our API_URL and necessary required params to the function, and by giving that API_URL and params. This gives responses and errors.

So in our action, we have to get our responses to pass our components. When response status code 200 or 201 at that time, we know that the API call was a success, and by succeeding in this API call, we are getting our required responses for use.

Below Example Of An HTTP Service Component

In this blog, we saw how we could use the Axios interceptor functions to intercept every request, update the request with authorization header, API key, etc. If everything is set up like this, we can forward the request. Once the request is resolved, take the response, and perform operations inside the application. 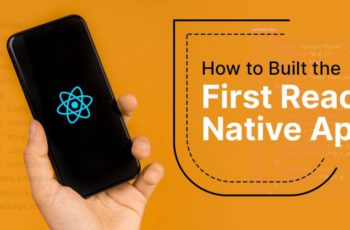 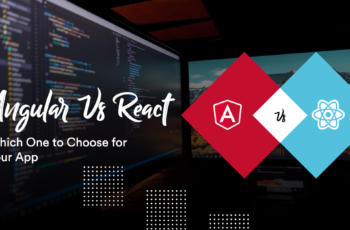