What, How and Why of CI/CD

Knowing the CI/CD pipelines is essential to managing your company’s output efficiently. In this article, we are going to look at what you really need to know and how CI/CD can automate your entire work process.

Let’s get into it!

What is the concept of CI/CD?

CI/CD stands for Continuous Integration and Continuous Delivery. The central idea behind this is automation. CI/CD together forms the basis of a workflow that developers can follow to build a standardized and consistent practice. By following a set practice, a team can be consistent and scalable.

A CI/CD pipeline can be easily understood as the process pathway to deliver a single production-ready software unit. Your team will choose which services they’ll use to build this; there’s no single canonical implementation of a CI/CD pipeline.

We hear CI/CD most of the time. So what do these terms stand for?

Before You Dive In Further, Check Out Our Video On Why CI/CD Matters For IT Leaders

Continuous Integration is the process of merging or committing code. During the development process, we know that we store all our code in a code repository such as GitLab or Github. During a sprint, code is committed several times a day and even multiple developers are working on different modules and we need to merge their code.

Continuous Integration is a habit, not a tool where it’s shared agreement in a team that:

What is CD (Continuous Delivery/Deployment)

Primarily, Continuous Delivery (CD)  is the automatic deployment of the code.

It is the extension of CI and is mainly adopted to ensure that the new changes introduced to the code are made available to the users as quickly as possible and that too in a viable method. CI and CD go hand in hand because, along with an automated testing process (CI), you should also have an automated release process to support the release of the updated application at any time, just by the click of a button. With continuous delivery, you can schedule the release of your application according to your plans. It may be daily, weekly, monthly, or whatsoever as per plan.


So basically, CI/CD is about developing and delivering the projects to the team, user, and client.

To Integrate CI/CD in your project following are the requirements

There are many tools available in the market to start working with CI/CD.

Following are a few of them:

If you were to check five boxes every day or 100 boxes on one day, which scenario would you manage better? CI/CD exactly does that for your software development process.

CI/CD is a shortened feedback loop used to help companies to deliver software while minimizing the flaws in it.

A CI/CD pipeline gives peace of mind to all stakeholders. Since the code will not get deployed if tests fail or the code is not executed, the process reduces bugs and downtime chances. The test cases written in advance enforce a benchmark to be followed by the developers. It is necessary to utilize CI/CD tools to create a team method, for quicker deployments and testing.

Here are the further benefits of implementing a CI/CD pipeline into a software development process.

Fastlane can be simply described as the easiest way to automate building and release your iOS and Android apps via a suite of tools that can work either autonomously or in tandem to accomplish tasks in android such as:

Here is more about how to use Fastlane?

Once you successfully install Fastlane.

We will first initialize Fastlane.

It will generate a Gemfile and Fastlane folder in the root.

It follows simple instructions defined in a Fast file. After you have set up Fastlane and your Fast file, you can integrate App Distribution with your Fastlane configuration. The Fast file has to be inside your ./fastlane directory.

To add App Distribution to your Fastlane configuration, run the following command from the root of your android  project: 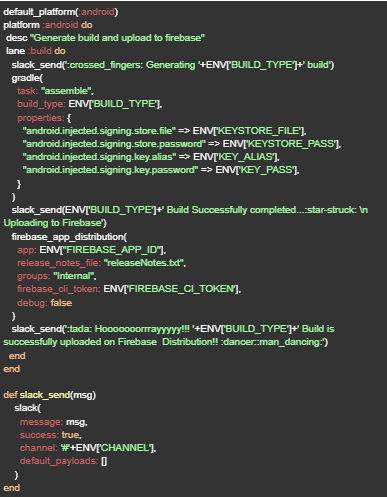 Fastlane’s build lane will compile and sign APK files with Keystore,  sending notification status to Slack and uploading it to firebase app distribution.

Let’s add environment variable files. We will use this Fastfile for multiple environments.

You can run this fastlane build using,

In the development process, we always follow some rules in that we have a test server where we test our application before handing it over to the client. Using multiple environments, we ensure that your software is rigorously tested before deployed and made available to users.

There are many advantages for multiple environments, such as

How DevOps solutions can simplify the delivery and deployment collaboration process in your business?

Why does DevOps matter during product development?

Manual deployment of software carries a lot of risks. There should be a formal release management process that ensures the removal of the majority of manual interference results in the elimination of any blindspot risks associated with the manual controlling of the release process.

Each time code is checked in by a developer, a suite of unit tests automatically analyzes the code quality (as per standards defined by the team) and reports this back, almost immediately, to the developer that performed the code check-in.

Branching can help you accelerate your team’s velocity, make maintenance tasks and feature development easier to manage. It allows developers to work in isolation from the “main source code branch” and there are many branching strategies you can deploy. 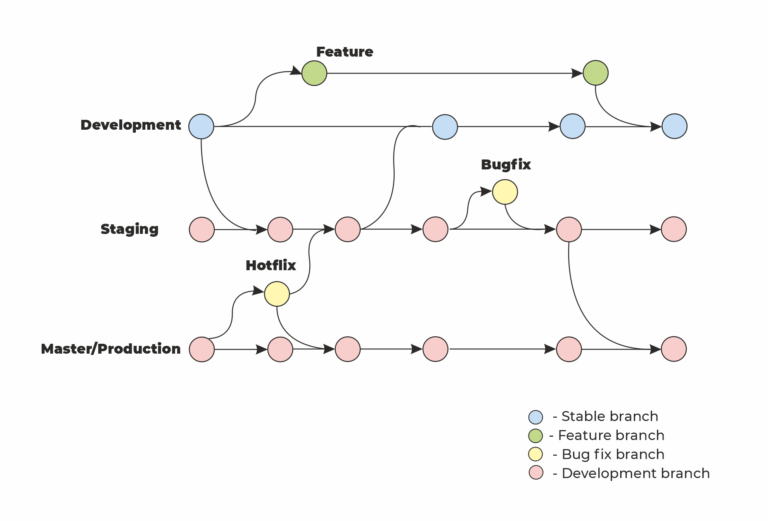 Development And Deployment Of Applications By DevOps

DevOps service providers guarantee an amazing combination of faster delivery backed by outstanding features. Along with that, DevOps accelerates the development and operational cycle that reduces the time an application or software takes to reach the market.

By connecting the gap between development and operations teams, DevOps encourages and promotes team effort and collaboration, making the organization effective and efficient.

CI/CD is a one-time setup and an automation process that helps test, create and deploy a bug-free application without investing so much time in repeated tasks related to deployment.

To implement the DevOps culture effectively, choosing the right DevOps process is necessary. DevOps experts at Mindbowser help create a comprehensive production architecture plan. Starting from selecting the ideal components to APIs and choosing between the right cloud option, the various decisions guide you to achieve desired organizational goals.

Providing DevOps as a service, we break the barrier between development and operational services. Below we have illustrated the DevOps process that we implement.